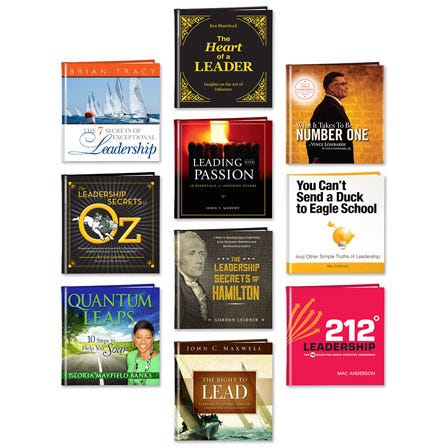 The 10 Leadership Books Bundle is perfect for both the new manager as well as the seasoned leader, and provides the tools, inspiration, and motivation to take leaders to the next level. This collection is not only perfect for your own personal growth; it also makes a great gift for any key member of your team and/or your best customers. With this 10 book collection, you can delve deeper into motivational topics important for leadership. You can also continue learning about leadership topics from our blog>>

GORDON LEIDNER has been a lifelong student of the American Civil War. He is a member of the Board of Directors of the Abraham Lincoln Institute, and maintains the popular Great American History website, through which he has provided numerous articles and free educational material about the American Civil War and the American Revolution since 1996. He has compiled quotes and stories about many revolutionary leaders into several books, including Abraham Lincoln – Quotes, Quips, and Speeches; The Founding Fathers – Quotes, Quips and Speeches; and The Leadership Secrets of Hamilton.

Leidner lives near Annapolis, Maryland with Jean, his wife of thirty-five years.

BJ GALLAGHER is an inspirational author and speaker. She writes business books that educate and empower, women’s books that enlighten and entertain, gift books that inspire and inform, and kids’ books that charm and delight. Whether her audience is corporate executives, working women, or a group of giggling youngsters, her message is powerful, positive and practical. BJ’s international best-seller, A Peacock in the Land of Penguins, has sold over 300,000 copies in 22 languages. Her additional books include It’s Never Too Late to Be What You Might Have Been, Why Don’t I Do the Things I Know are Good for Me?, Learning to Dance in the Rain, The Best Way Out is Always Through, Oh, Thank Goodness, It’s Not Just Me!, Oil for Your Lamp, Friends, The Road to Happiness, The Power of Positive Doing, The Power of One, and The Leadership Secrets of Oz.

BRIAN TRACY is a professional speaker, trainer, and consultant and is the chairman of Brian Tracy International, a training and consulting company based in Solana Beach, California. He has been a highly successful entrepreneur and in 1981, began teaching his success principles in talks and seminars around the country.

Today, his books, audio programs, and video seminars have been translated into thirty-five languages and are used in fifty-two countries. Brian has shared his ideas with more than 4 million people in forty-five countries since he began speaking professionally. He has served as a consultant and trainer for more than 1,000 corporations. He has lived and practiced every principle in his books, and has taken himself and countless thousands of other people from frustration and underachievement to prosperity and success. His books include Achieve Any Goal, Bull's Eye, Eat That Frog!, Just Shut Up and Do It!, The 7 Secrets of Exceptional Leadership and Your Most Valuable Asset.

JOHN C. MAXWELL is an internationally recognized leadership expert, speaker, and author who has sold over 18 million books. His organizations have trained more than 2 million leaders worldwide. Dr. Maxwell is the founder of EQUIP and INJOY Stewardship Services. Every year he speaks to Fortune 500 companies, international government leaders, and audiences as diverse as the U.S. Military Academy at West Point, the National Football League, and ambassadors at the United Nations.

A New York Times, Wall Street Journal and Business Week best-selling author, Maxwell was named the World’s Top Leadership Guru by Leadershipgurus.net. He was also one of only 25 authors and artists named to Amazon.com’s 10th Anniversary Hall of Fame. Three of his books, The 21 Irrefutable Laws of Leadership, Developing the Leader Within You and The 21 Indispensable Qualities of a Leader have each sold over a million copies.

KEN BLANCHARD is the Chief Spiritual Officer of The Ken Blanchard Companies, an international management training and consulting firm founded with his wife, Dr. Marjorie Blanchard, in 1979. He is also cofounder of the Center for FaithWalk Leadership, a nonprofit ministry dedicated to inspiring and equipping people to lead like Jesus at work, home and the community. Few people have made a more positive and lasting impact on the day-to-day management of people and companies as Ken Blanchard.

He is the author of several best-selling books, including the blockbuster international bestseller The One Minute Manager and the giant business best-sellers Raving Fans, Gung Ho! and Whale Done! His coauthored books about Jesus as the ultimate leadership role model (Leadership by the Book and The Servant Leader) have ignited a “Lead Like Jesus” movement. Additional books include the inspirational The Simple Truths of Service, which he co-authored with Barbara Glanz, and Heart of a Leader.

He and his wife, Margie, live and work in San Diego. They spend free time with their beloved dog, Joy.

DR. GLORIA MAYFIELD BANKS, described by many as “energy in motion,” is a woman of many accomplishments. She has a Harvard MBA and an honorary doctorate from the University of Maryland–Eastern Shore and is a renowned motivational success strategist, a multimillionaire entrepreneur, and a Mary Kay Independent Elite Executive National Sales Director.

Growing up in a loving family in Detroit, Michigan, Gloria was the third of four girls born to parents who were both educators. At an early age, Gloria’s parents discovered she struggled with reading, which was later diagnosed as dyslexia. Despite the challenge, Gloria never considered dyslexia a handicap, just another obstacle to overcome. Gloria graduated from Howard University and began her career as a sales representative for IBM. She later joined Stratus Technologies as a manufacturing marketing manager and went on to become assistant director of admissions at the Harvard University School of Business, where she traveled nationally and internationally to recruit students. Gloria has since counseled and encouraged victims of domestic violence and lobbied in Washington, DC, as an advocate for domestic violence prevention.

Faced with being a single mother and dealing with a difficult divorce, Gloria began her Mary Kay business to supplement her income. Within eighteen months, she set new company sales records and later grew her business to more than $24 million in area retail sales and an area of more than six thousand Independent Beauty Consultants. Her record-breaking ascent to Independent Elite Executive National Sales Director was faster than anyone in the company’s fifty-year U.S. history. Gloria is one of only three women in the United States to become a Mary Kay Independent Elite Executive National Sales Director.

Today, she has expanded her entrepreneurial influence to include not only her record-breaking Mary Kay business, but also her co-ownership of a marketing, product, and promotional events company. She is happily married to her husband, Ken, and they share four adult children and three grandchildren and reside in Baltimore, Maryland.

Vince also brings that same passion to his speaking and writing. He's written four books and speaks 60-70 times a year on topics such as Leadership, Motivation and Teambuilding. For more information, please visit www.vincejr.com.
Reviews
Write Your Own Review