What It Takes to Be Number One 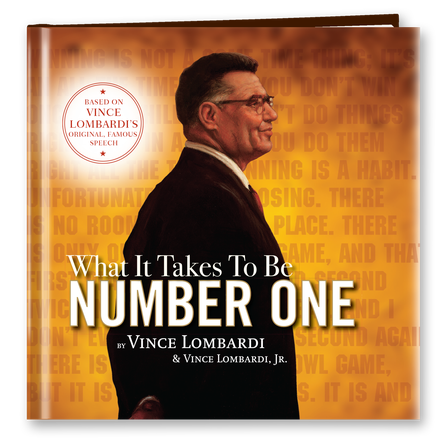 Lombardi! Perhaps no single word in the English language communicates such strong visions of excellence, discipline, commitment, and of course, winning. The Lombardi philosophy transcends football! His powerful words capture the fundamentals of success in any sport, any business, any life, and any age.

Through this book and Vince Lombardi’s words, you can learn to apply the Lombardi philosophy to:

This remarkable gift book will bring Lombardi’s philosophy to life, like never before. With vintage photographs (some seen for the first time), great quotes, and nine inspirational chapters by Lombardi’s son, Vince Lombardi Jr,. that tie back to his father’s speech (Commitment, Discipline, Excellence, Mental Toughness, Habit, Faith, Passion, Results, and Truths).

What It Takes to Be Number One is a gift that will be treasured for years to come!

Vince also brings that same passion to his speaking and writing. He's written four books and speaks 60-70 times a year on topics such as Leadership, Motivation and Teambuilding. For more information, please visit www.vincejr.com.
Reviews 2
Write Your Own Review
Other Shoppers Enjoyed
We found other products you might like!