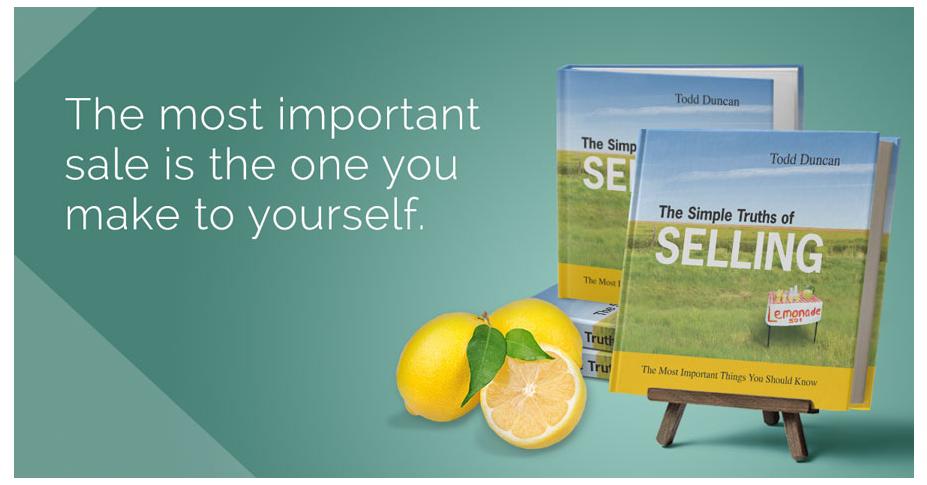 the simple truths of selling todd duncan
No comments

An excerpt from
The Simple Truths of Selling
by Todd Duncan

My orientation into professional selling consisted of, "Here's your desk; here's your phone; good luck Todd, you're on your own." I was lost from the start.

I was given a territory that stretched thirty miles and within it were twenty-five key accounts with whom I was to develop a business relationship. I was a mortgage originator and these accounts were real estate agencies who would, in theory, want to use my services to secure financing for their home-buying clients. I learned quickly that theories are often not realities.

I walked through the front door of that first building and immediately everyone became busy. They picked up their phones feigning an important call or started talking with coworkers—anything to dodge an encounter with me, who clearly wore "Salesperson" on my forehead.

To get to the point, nothing happened. No contacts, no prospects, no sales. I drove to the next agency and got the same result. And the next and the next. After five rejections, I quit and went to the beach. It was sunny.

While my decision didn't demonstrate the best work ethic, quitting that day ended up being a wise move. After some thinking time on the sand, I called a friend in the real estate business and asked if I could observe how my peers were selling to the people in his office. He agreed and I spent the next three hours cringing at the same mistakes I made. Then, at about 4:00 P.M., a pleasant face with a leather portfolio strolled through the door. He asked for a woman by name and within seconds he was in her office. Forty-five minutes later, she escorted him to the front door and in parting he said, "Thanks for your time. I look forward to a long and profitable partnership." My heart felt warm again. He had it and I wanted it.

The man's name was John and I connected with him shortly thereafter to learn how he'd done it. He shared with me three prospecting rules that changed my efforts for good. I believe they will do the same for any salesperson.

1. Never call on a prospect who isn't expecting your call.

2. Never call on a prospect who isn't excited to talk to you.

3. Never end a prospecting call without adding more value than you received.

Shop The Simple Truths of Selling >>