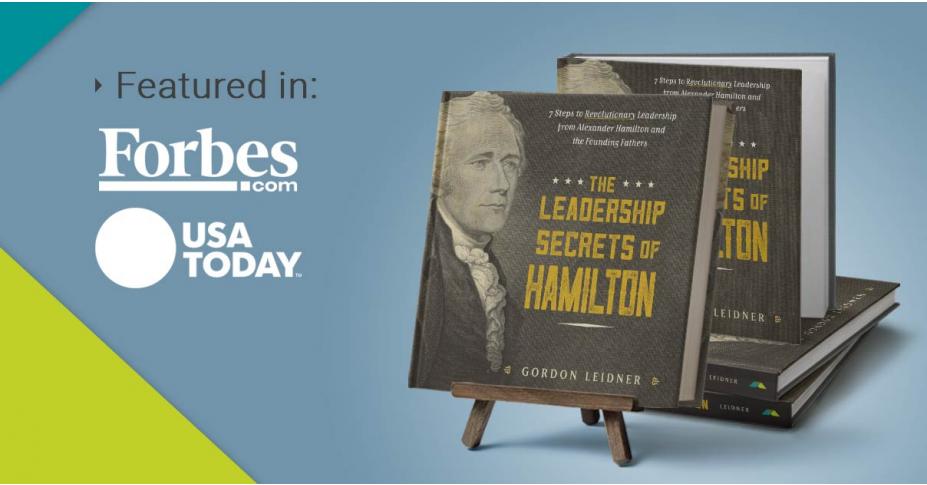 Introduction
from The Leadership Secrets of Hamilton
by Gordon Leidner

The Founding Fathers' adoption of the Declaration of Independence, the United States Constitution, and the Bill of Rights was the most revolutionary demonstration of leadership in American political history. Collectively, these documents established the spirit, the letter, and the protection of a radical form of government that was founded not on the rights of kings but on the rights of the common man.


Democracy had been attempted by societies and city-states at various times in the history of mankind, and it had always failed. But in North America in the late eighteenth century, in spite of the violent resistance of a king who ruled the most powerful nation on earth, democratic government finally succeeded.


What was the primary reason for this success?


The key ingredient to the successful establishment of the new nation was leadership—the leadership of a handful of men known today as the Founding Fathers.


The Founding Fathers (also called Founders) inspired the support and sacrifice of millions of Americans for the cause of establishing an independent, republican form of government. This desire for independence from Great Britain began to take root in the colonies in 1763, shortly after the end of the French and Indian War. To help pay for the standing army he kept in America, Britain's King George III started taxing the colonists American political activists, who began to call themselves Patriots, protested that taxation was unfair because the colonies had no official representation in the British Parliament.


These protests ranged from verbal denunciations in newspapers to violent actions—the latter of which were usually initiated by a Patriot organization known as the Sons of Liberty. The King's loyal citizens in America (called Loyalists or Tories) as well as his appointed governors, jurists, and officials were sometimes the object of harassment or violence. Hoping to avoid bloodshed, the American colonies convened the First Continental Congress in 1774, which appealed to King George III for his intervention. This appeal was ignored, and conflict broke out between American militia and British troops on April 19, 1775, in skirmishes at Lexington and Concord, Massachusetts.


In June of 1775, Congress appointed George Washington commander in chief of the Continental Army, and the first major engagement of the war occurred at the Battle of Bunker Hill in Boston. After a year of war, delegates Thomas Jefferson, John Adams, and Benjamin Franklin led the effort to draft the Declaration of Independence, which was signed by the Second Continental Congress on July 4, 1776.

Congress also began drawing up the nation's first constitution in 1776, which became known as the Articles of Confederation. It was a weak document, and went unratified by the states until 1781, but it nevertheless provided some degree of governmental structure until America won the War of Independence in 1783.


Under the Articles of Confederation, Congress had no power of taxation, was wholly dependent on the states for its money, and had no authority to force delinquent states to pay. This resulted in hyperinflation and the nation's being unable to pay its bills. To rectify this, in 1786 Alexander Hamilton introduced a resolution calling for a convention to amend the Articles of Confederation. In response, the Constitutional Convention assembled in Philadelphia in May of 1787. This convention was chaired by George Washington and lasted from May to September of that year. During those eventful months, under the leadership of James Madison, delegates from the states went far beyond the simple amending of the Articles of Confederation, and they drafted a completely new United States Constitution.


The Constitutional Convention of 1787 was held behind closed doors, and the reason for secrecy was the political difficulty of getting fifty-five state representatives to agree on a framework for democratic government. For months the delegates argued about intrinsic issues such as the method of apportioning the House of Representatives, the relationship between state governments and the federal government, and the division of power between the executive, legislative, and judicial branches.


After this prolonged, provocative debate (and what George Washington proclaimed to be a miracle) the delegates signed the Constitution and sent it to the states for ratification. Although this was a huge accomplishment, if it were not for the subsequent leadership of Alexander Hamilton, the proposed constitution would probably not have been ratified. Hamilton, along with James Madison and John Jay, wrote a series of eighty-five newspaper articles now known collectively as The Federalist Papers. These intellectual arguments in support of the Constitution were essential to its acceptance and ratification by the states, which was completed on June 21, 1788.


In addition to The Federalist Papers, there was another key factor in the successful ratification of the Constitution. Concerned with limiting the power of the federal government and securing the liberty of citizens, many states had refused to ratify the Constitution without the adoption of a bill of rights. Answering this call, James Madison led the development of a series of amendments, ten of which were ratified by the states on December 15, 1791. These first ten amendments to the U.S. Constitution are known today as the Bill of Rights.


After the Constitution was ratified, the Founders realized that it was essential that the first president of the United States be a man who could unify the young nation. All knew that the first presidential administration would establish important precedents in the areas of finance and foreign relations. George Washington was the only logical choice for president, and his appointments of Alexander Hamilton as secretary of the treasury and Thomas Jefferson as secretary of state proved essential to the rapid expansion of the nation.

Shop The Leadership Secrets of Hamilton >>