How to Geoarbitrage Your Way to Saving Money Where You Live 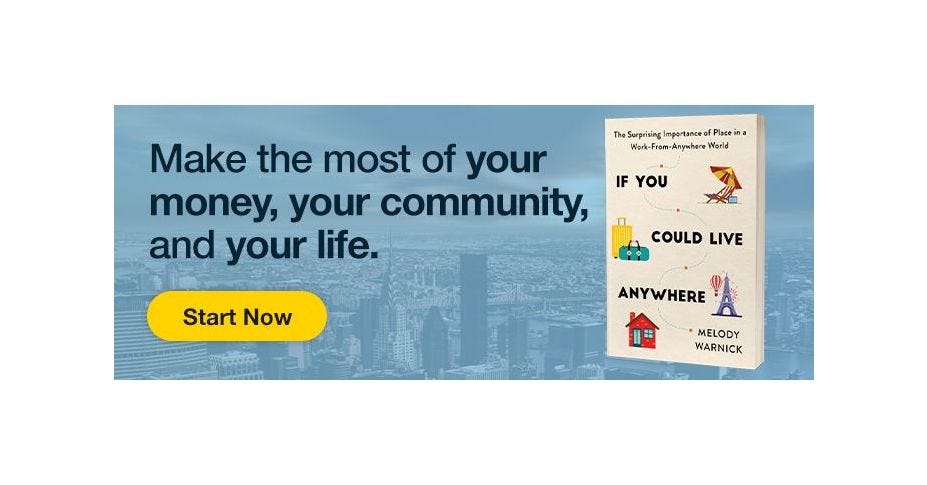 If you want to increase your net worth, you have two levers for doing it: earn more or spend less. Then there’s this magical thing called geoarbitrage that’s a way to both earn more and spend less at the same time by leveraging your remote work salary in a lower cost of living area.

In 2017, the all-distributed software company Zapier made headlines for offering its 85 employees a $10,000 “delocation package” bonus to cover moving expenses for anyone who wanted to leave San Francisco, where the company was based. Zapier cofounder Wade Foster explained the thinking behind the geographic nudge in a company blog post: While the Bay Area was the tech-worker big leagues, its crippling cost of living kept employees in place-attachment limbo, feeling like they could never actually put down roots. “Despite loving the area, the realities are many of us need to look elsewhere to create the life we want for our families.”

Zapier made the boss move of giving all its employees, no matter their location, the Bay Area pay rate. Most employees were already making upwards of $90,000 a year—a titch below the median income in San Francisco, but almost double the median in a city like Indianapolis. This was a nod to the power of geographic arbitrage, Zapier’s way of saying, “Take the money and run.”

With 2022’s triple whammy of high inflation, high real estate prices, and high interest rates, life is more expensive everywhere, not just in big cities like San Francisco and New York. But even us small-town folk can find ways to make geographic arbitrage work to our benefit.

Take Sharon Tseung, for instance, who became a digital nomad after a solo trip to Europe. She’d realized a few key concepts: Money can buy you the freedom to design your life. Don’t work for money, make money work for you. Build assets, not liabilities. If you don’t want to work forever, build passive income streams.

So Sharon, who’d always been preternaturally wise about finances (she bought a rental property at age 22), got serious about developing micro-businesses that she could manage abroad with little effort. On Etsy Sharon started selling Photoshop and Microsoft Word templates that she designed herself. She joined Merch by Amazon, selling designs for print-on-demand apparel. Ads on her blog DigitalNomadQuest.com brought in a fairly steady stream of cash. “It was a total transition from actively working to passive income,” Sharon says.

Once she was on the road, she logged expenses obsessively. Her first year as a digital nomad cost her around $17,000, and because she’d built multiple sources of passive income, she could afford to travel indefinitely.

Or there’s Susanna Perkins, who relocated to Panama from Florida after she and her husband were laid off. The much lower cost of living eased their financial pain, which gave Susanna the emotional bandwidth to contemplate pivoting her career. She’d been freelancing as a writer, designer, and website builder, but “before we went to Panama, I was so stressed about money that I was practically incapacitated,” she says. “Finding the next project required a level of creative thought that was just almost impossible for me at that time.”

Now she curled up with her laptop in a hammock and brainstormed a website called WordPress Building Blocks, where she would teach readers how to build their own WordPress sites. Eight years later, the site is still her main source of income. If she hadn’t moved to Panama, she doesn’t think she would have ever launched it.

She wouldn’t have created FutureExpats.com either, her website about retiring overseas. In 2012, Susanna posted a roundup of various quality-of-life rankings for cities worldwide. Most of the places in the top spots, from Vienna to Vancouver, British Columbia, were outrageously expensive.

But Susanna believes that if you’re adventurous, a LCOL town can offer Anywhereists a great life. Though she and her husband have moved back to Florida to care for her husband’s aging parents, they plan to return overseas in the future.

For now, they’re watching their kids become geographic arbitrage experts. During the pandemic, one of their sons, a software engineer, traded Seattle for the Caribbean island of Antigua. “He's seen firsthand the exodus that started from some of the expensive techie cities like San Francisco, Seattle, Boston, New York,” Susanna says. “Why not go somewhere else? Where for $2,000 a month you could have a 3,000 square foot house?”

Think you could change your life with geographic arbitrage? Start by looking at this cost of living index by country. Potentially, anything with a lower cost of living rank than the United States could be a money saver. Croatia? Brazil? The Maldives? Where could you go next?