Secrets of the World Class 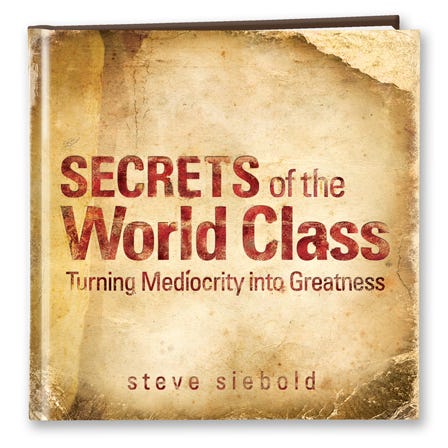 Steve Siebold had the privilege of competing against, coaching, being coached by and observing world-class performers since he was six years old. As a junior tennis player competing throughout the United States from ages 7-18, he became fascinated with what it takes to become a champion. His dream was to be ranked among the Top 10 players in the world, but he ended up falling short. At his best, he hovered around the Top 500 in the world, and that’s as high as he could seem to reach. Deep down, Steve knew he had the talent to make his dream a reality, and he knew the missing link was mental. After hanging up his racquet for the last time, Steve became obsessed with uncovering the mental toughness secrets of champions.

Starting in 1984, Steve spent every free moment conducting interviews with champions, reading their books and studying everything he could get his hands on about the psychology of peak performance. Steve’s friends said he was obsessed. They were right. This book, Secrets of the World Class, is the result of his 20-year obsession.

Secrets of the World Class contains no theories. Every secret comes straight from the street of experience, either Steve’s own or that of his clients. This book is loaded with ideas you can implement immediately.

Steve is an internationally recognized expert in the field of peak performance and mental toughness. He’s spoken to many Fortune 500 companies and other companies around the world. Also, he was recently on the Larry King Show and the Today Show sharing what he has learned in his search for the keys to greatness. Here’s a small sampling from 27 highly motivational chapters from Secrets of the World Class:

Try using Secrets of the World Class as part of your next training event, team meeting or book club! Our free discussion guide is the perfect companion to the book, and will help you get the most out of your event. Included are discussion points and questions that will help guide your team through this book. Download the guide now!

Customer Reviews 41
Write Your Own Review

Other Shoppers Enjoyed
All content and design copyright © Simple Truths 2023. All Rights Reserved.