On 6/23/2021 from 10pm-6am CST we'll be performing scheduled maintenance. During this time there could be reduced functionality on the website. Thank you for your patience.

Moving from Ordinary to Extraordinary 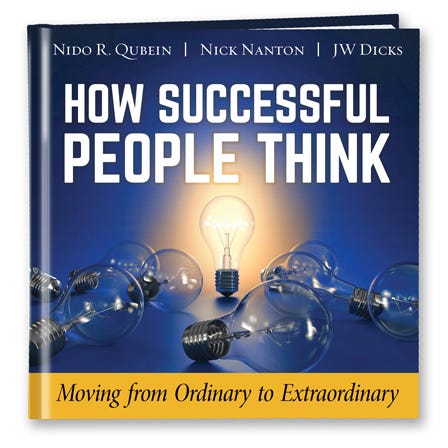 Now Available in the Giftable Hardcover!

Dreams are only achieved by people with clear vision and commitment. Elevate your daily routine and make extraordinary a priority by discovering How Successful People Think. Success is an enticing destination; invite yourself to the journey.

Authors J.W. Dicks, Nick Nanton and Nido Qubein provide remarkable, real-life stories that show how everyday people align their thoughts and actions to achieve success. When you abandon an ordinary mindset, you can envision the accomplishments that you have always wanted. Learn the lessons that will set you apart from the crowd and teach you to tap into your true value. Each experience is a new chapter in your success story.

DR. NIDO QUBEIN came to the United States as a teenager, with little knowledge of English and only $50 in his pocket. His life has been an amazing success story. He has been the recipient of many honors including the Ellis Island Medal of Honor, Sales and Marketing International’s Ambassador of Free Enterprise, the Horatio Alger Award for Distinguished Americans, and induction into the Global Society for Outstanding Business Leadership and the International Speakers Hall of Fame. Dr. Qubein is president of High Point University, an extraordinary institution with 4,800 undergraduate and graduate students from 51 countries.

He has authored more than two dozen books and audio programs distributed worldwide in more than 20 languages, including Attitude, Change Your Words, Change Your World, Daily Motivation, How Successful People Think, Seven Choices for Success and Significance, and Uncommon Sense. His foundation has granted more than 700 scholarships worth more than $6 million. He serves on numerous corporate boards including BB&T, La-Z-Boy and DOTS. He is chairman of Great Harvest Bread Company with 240 stores in 44 states. Toastmasters International named Dr. Qubein Top Business and Commerce Speaker and awarded him the Golden Gavel Medal. He is the founder of the prestigious National Speakers Association Foundation and speaks to business and professional groups nationally on leadership and transformational culture.

NICK NANTON, ESQ. is a three-time Emmy Award–winning director, producer, and filmmaker, and is known as the Top Agent to Celebrity Experts around the world for his role in developing and marketing business and professional experts through personal branding, media, marketing, and public relations. Nick serves as the CEO of the Dicks + Nanton Celebrity Branding Agency, an international branding and media agency with more than 2,200 clients in thirty-three countries. He has produced large-scale events and television shows with Steve Forbes, Brian Tracy, Jack Canfield (creator of the Chicken Soup for the Soul series), Michael E. Gerber, Tom Hopkins, Dan Kennedy, and many more.

Nick is recognized as one of the top thought leaders in the business world, speaking internationally and coauthoring thirty-four bestselling books, including the Wall Street Journal bestseller Story Selling, and the Simple Truths title, How Successful People Think. Nick has been quoted in USA Today, the Wall St. Journal, Newsweek, BusinessWeek, Inc. magazine, the New York Times, Entrepreneur magazine, Forbes, and FastCompany.com. He has appeared on ABC, NBC, CBS, and FOX television affiliates around the country, as well as on E!, CNN, FOX News, CNBC, MSNBC, and hosts his own series on the Bio Channel, Profiles of Success.

JW DICKS ESQ., is a Wall Street Journal best-selling author, Emmy Award-winning producer, publisher, board member, and advisor to organizations such as the XPRIZE, the National Academy of Best-Selling Authors, and the National Association of Experts,Writers and Speakers. JW acts as strategic business development counsel to clients internationally and has been quoted on business and financial topics in such national media as USA Today, The Wall Street Journal, Newsweek, Forbes, CNBC.com, and Fortune Small Business. JW serves as the CEO of the Dicks + Nanton Celebrity Branding Agency, an international branding and media agency with more than 2,200 clients in thirty-three countries.

Considered a thought leader and curator of information, JW has more than forty-three published business and legal books to his credit, including the Simple Truths title How Successful People Think, and has coauthored with such legends as Brian Tracy, JackCanfield, Tom Hopkins, Steve Forbes, Nido Quebin, Dr. Ivan Misner, Dan Kennedy, and Mari Smith. He is the resident branding expert for Fast Company’s internationally syndicated blog and is the editor and publisher of Celebrity Expert Insider, a monthly newsletter sent to experts worldwide.

JW and his wife of forty-two years, Linda, have two daughters, two granddaughters, and two yorkies. He is a sixth generation Floridian and splits his time between his home in Orlando and his beach house on Florida’s west coast.