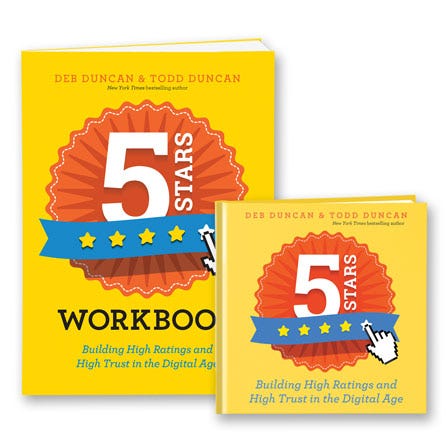 This bundle includes the following items by expert authors by Deb Duncan and Todd Duncan:

5 Stars: Building High Ratings and High Trust in the Digital Age – Learn how to consistently generate positive reviews by building consumer trust and connecting with your audience in innovative ways.

5 Stars Workbook – This guide will help you think meaningfully about your current business practices and brainstorm ideas for the future. You'll be able to identify ways that you can build consumer trust, earn positive reviews, and boost your profits.

TODD DUNCAN has earned a transformative reputation worldwide as a top trainer, motivator, and personal coach for business professionals in the sales, mortgage, real estate, and financial services industries. Todd’s influence in the peak-performance world impacts more than 250,000 people annually around the globe, and he has personally coached some of the world’s top-producing sales professionals.

Todd is the author sixteen books, including the New York Times bestsellers Time Traps: Proven Strategies for Swamped Salespeople and High Trust Selling: Make More Money in Less Time with Less Stress. In addition, he authored the inspirational book Sales Motivation and co-authored the customer service must-reads The 10 Golden Rules of Customer Service (formally titled The $6,000 Egg) and 5 Stars with wife Deb Duncan. His books are in forty- four languages with more than one million copies in print. Todd has been featured in the New York Times, the Wall Street Journal, the Los Angeles Times, the Seattle Times, Entrepreneur magazine, and SUCCESS magazine, and on the Success Network, The Dave Ramsey Show, and FOX News, among other media outlets.

DEBRA DUNCAN is president of American Television Ventures and has been a pioneer in the direct response television industry. Starting in college, she was a producer of Everybody’s Money Matters on the Lifetime Television Network. She has written, produced, and directed more than one hundred direct response TV programs, and has great insights on how to frame your message so that people will respond.

Deb is the author of two children’s fairy tales, A Thousand Princes and Mrs. Prince, as well as several screenplays. In addition, Deb co-authored The 10 Golden Rules of Customer Service (formally titled The $6,000 Egg) and 5 Stars with husband Todd Duncan.