Building High Ratings and High Trust in the Digital Age 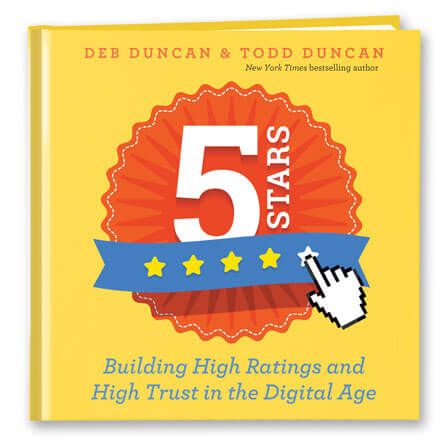 Today’s consumer doesn’t order dinner, buy a pair of shoes, visit a museum, or even listen to a CD without first reading online reviews. Learn how to consistently generate positive reviews with 5 Stars: Building High Ratings and High Trust in the Digital Age.

Consumer trust is the most important influencer a brand can have because it yields positive online ratings, which in turn yield high profits. To be successful in the current market, you must learn to use consumer trust and technology to your advantage. 5 Stars explores three concepts that will guide you as you work to accomplish this:


Technology can help or harm your company, depending on how you use it. On the one hand, it provides the most innovative and efficient ways to reach your audiences and gain their trust. Yet, it can also distract you from your goals. 5 Stars is filled with tips and tricks to help you end that unproductive cycle and harness technology to create success.

TODD DUNCAN has earned a transformative reputation worldwide as a top trainer, motivator, and personal coach for business professionals in the sales, mortgage, real estate, and financial services industries. Todd’s influence in the peak-performance world impacts more than 250,000 people annually around the globe, and he has personally coached some of the world’s top-producing sales professionals.

Todd is the author sixteen books, including the New York Times bestsellers Time Traps: Proven Strategies for Swamped Salespeople and High Trust Selling: Make More Money in Less Time with Less Stress. In addition, he authored the inspirational book Sales Motivation and co-authored the customer service must-reads The 10 Golden Rules of Customer Service (formally titled The $6,000 Egg) and 5 Stars with wife Deb Duncan. His books are in forty- four languages with more than one million copies in print. Todd has been featured in the New York Times, the Wall Street Journal, the Los Angeles Times, the Seattle Times, Entrepreneur magazine, and SUCCESS magazine, and on the Success Network, The Dave Ramsey Show, and FOX News, among other media outlets.

DEBRA DUNCAN is president of American Television Ventures and has been a pioneer in the direct response television industry. Starting in college, she was a producer of Everybody’s Money Matters on the Lifetime Television Network. She has written, produced, and directed more than one hundred direct response TV programs, and has great insights on how to frame your message so that people will respond.

Deb is the author of two children’s fairy tales, A Thousand Princes and Mrs. Prince, as well as several screenplays. In addition, Deb co-authored The 10 Golden Rules of Customer Service (formally titled The $6,000 Egg) and 5 Stars with husband Todd Duncan.