On 6/23/2021 from 10pm-6am CST we'll be performing scheduled maintenance. During this time there could be reduced functionality on the website. Thank you for your patience. 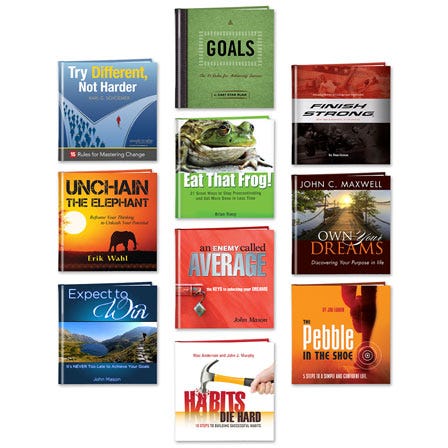 The 10 Goal Setting Books Bundle will help you get started on your goals, motivate you to stay on track and inspire you to reach success. Whether your goals are for personal or professional growth, now is the time to set your goals, get to work, and make them happen! With this 10 book collection, you can delve deeper into motivational topics important for reaching your goals. If you need additional motivation, make sure to read our blog>>

Goals
Eat That Frog!
An Enemy Called Average
Habits Die Hard
Finish Strong
Own Your Dreams
The Pebble in the Shoe
Expect to Win
Unchain the Elephant
Try Different, Not Harder

BRIAN TRACY is a professional speaker, trainer, and consultant and is the chairman of Brian Tracy International, a training and consulting company based in Solana Beach, California. He has been a highly successful entrepreneur and in 1981, began teaching his success principles in talks and seminars around the country.

Today, his books, audio programs, and video seminars have been translated into thirty-five languages and are used in fifty-two countries. Brian has shared his ideas with more than 4 million people in forty-five countries since he began speaking professionally. He has served as a consultant and trainer for more than 1,000 corporations. He has lived and practiced every principle in his books, and has taken himself and countless thousands of other people from frustration and underachievement to prosperity and success. His books include Achieve Any Goal, Bull's Eye, Eat That Frog!, Just Shut Up and Do It!, The 7 Secrets of Exceptional Leadership and Your Most Valuable Asset.

DAN GREEN is an entrepreneur with a passion for finishing strong in everything he does. Over the past 20 years, he as excelled in his roles as salesman, sales leader, sales trainer, patented inventor, race car driver, author, speaker, husband and father. Adopting the "Finish Strong" attitude has been a driving force in Dan's life and a key catalyst in achieving his goals in business, sports and in life. Dan is the founder of Finish Strong, LLC and author of Finish Strong, Finish Strong Motivational Quotes, Finish Strong Teen Athlete and the new Finish Strong Ignite Reads 1-hour read.

GARY RYAN BLAIR has been called one of the world’s most influential thinkers on excellence and productivity and has been a keynote speaker and facilitator for such organizations as IBM, Federal Express, Subway, and the U.S. Army. He conducts workshops for individuals and organizations around the world. He is the president of The GoalsGuy and has more than 20 years of experience helping business owners, corporate executives, and sales professionals manage their time, set their priorities, and stay focused so they can achieve their goals, grow their business, and build sustainable competitive advantage.

JOHN C. MAXWELL is an internationally recognized leadership expert, speaker, and author who has sold over 18 million books. His organizations have trained more than 2 million leaders worldwide. Dr. Maxwell is the founder of EQUIP and INJOY Stewardship Services. Every year he speaks to Fortune 500 companies, international government leaders, and audiences as diverse as the U.S. Military Academy at West Point, the National Football League, and ambassadors at the United Nations.

A New York Times, Wall Street Journal and Business Week best-selling author, Maxwell was named the World’s Top Leadership Guru by Leadershipgurus.net. He was also one of only 25 authors and artists named to Amazon.com’s 10th Anniversary Hall of Fame. Three of his books, The 21 Irrefutable Laws of Leadership, Developing the Leader Within You and The 21 Indispensable Qualities of a Leader have each sold over a million copies.

JOHN MASON is a national best-selling author and noted speaker. He is the founder and president of Insight International, an organization dedicated to helping people reach their dreams and fulfill their destinies.

JIM FANNIN is the “World’s #1 Coach of Champions” by producing more champions in sports, business and life than anyone on earth since 1974. He is a mental performance coach, author, professional platform speaker, life strategist, sports & business consultant, and former professional tennis player. He has 35+ years of professional coaching, consulting and public speaking experience.

Jim has also published multiple best-selling works including eight In the Zone audio products, S.C.O.R.E.® for Life book, and the internationally renowned 90 Second Rule™ audio/DVD program. For more information about Jim, to inquire about speaking engagements, or to learn more about incorporating The Pebble in the Shoe into your next event, visit www.jimfannin.com, call 877-210-2001 or email askjim@jimfannin.com.

KARL SCHOEMER has been delighting and assisting clients for more than 20 years in change leadership, speaking, facilitation, meeting facilitation, and more. His Master’s in Business from Indiana Wesleyan University and his unrivaled enthusiasm for dynamic change result in a fresh, market-anchored approach. The author of 7 books, including Try Different, Not Harder, Karl has worked on 5 continents with thousands of public and private sector organizations of all sizes.