By Steve Siebold
$19.99
Be the first to review this product 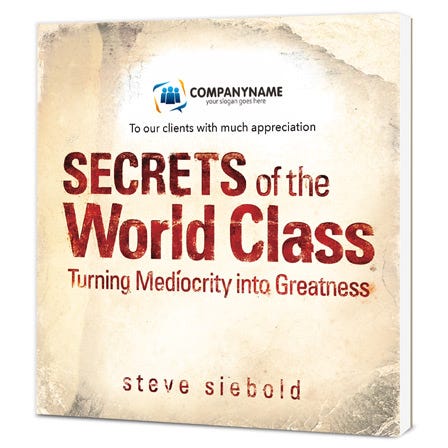 Starting in 1984, Steve spent every free moment conducting interviews with champions, reading their books and studying everything he could get his hands on about the psychology of peak performance. Steve’s friends said he was obsessed. They were right. This book, Secrets of the World Class, is the result of his 20-year obsession.

Create a world class custom package by adding your own logo and message to this Simple Truth’s classic. Secrets of the World Class contains no theories. Every secret comes straight from the street of experience, either Steve’s own or that of his clients. This book is loaded with ideas you can implement immediately.

His first book, 177 Mental Toughness Secrets of the World Class, sold over 100,000 copies. Additionally, he is the author of How Rich People Think and Secrets of the World Class. As a professional speaker, Steve addresses approximately 60 live audiences per year and ranks among the top 1% of income earners worldwide. In 2007, Steve won the prestigious Telly Award for most outstanding host for his national television show, Mental Toughness of Champions. In 2009, he co-starred in the feature film, Beyond the Secret, the long awaited follow up to the mega-hit movie, The Secret, which was seen by over 1 billion people worldwide.