Words from 3 Leaders Who Shaped the World 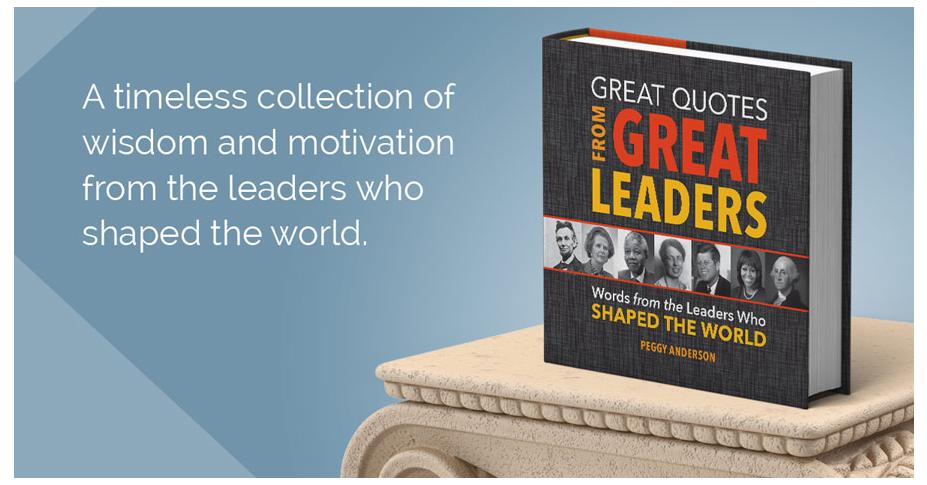 WINSTON CHURCHILL—author, orator, and statesman—led Great Britain from the brink of defeat to victory as wartime prime minister. Born in Oxfordshire, England, in 1874, Churchill began serving his country as a military leader in the Boer War and later as a prominent leader during World War I. As a member of Parliament, his repeated warnings of the menace of Hitler’s Germany, combined with his aggressive and convincing oratory skills, resulted in his appointment to prime minister in 1940. He joined Franklin D. Roosevelt and Joseph Stalin in 1940 to shape Allied strategy in World War II. An intense patriot and a romantic believer in his country’s greatness, Churchill gave his people the strong leadership and devotion that ultimately led to Britain’s military salvation. He was awarded the Nobel Prize for literature in 1953, largely due to his book The Second World War, and was also knighted the same year.

"Courage is going from failure to failure without losing enthusiasm."

"If we are together nothing is impossible. If we are divided all will fail."

GOLDA MEIR was a founder of the State of Israel and served as its fourth prime minister. Born in Kiev, Ukraine, she emigrated to Wisconsin in 1906. Her political activity began as a leader in the Milwaukee Labor Zionist Party. After emigrating to Palestine in 1921, she held key posts in the Jewish Agency and in the World Zionist Organization. After Israel proclaimed its independence in 1948, she served as minister of labor and then foreign minister. Meir was elected prime minister in 1969. During her administration, she worked for a peace settlement in the Middle East using diplomatic means. However, these efforts were interrupted by the outbreak of the fourth Arab- Israeli war. She resigned her post in 1974 but remained an important political figure throughout her retirement. Golda Meir’s true strength and spirit were emphasized when, after her death in 1978, it was revealed that she had suffered from leukemia for twelve years.

"Trust yourself. Create the kind of self that you will be happy to live with all of your life. Make the most of yourself by fanning the tiny, inner sparks of possibility into flames of achievement."

"I can honestly say that I was never affected by the question of the success of an undertaking. If I felt it was the right thing to do, I was for it regardless of the possible outcome."

At Fordham University, Lombardi played guard on the famous line known as the “Seven Blocks of Granite.” He studied law at Fordham and had a brief career as a pro league football player before becoming a high school coach in 1939. After serving as an assistant coach in college and in the pros, he was hired as head coach and general manager of the Green Bay Packers in 1959. His Spartan training regimen and personal drive turned the Green Bay Packers from a team accustomed to defeat to the paragon of victory.

He went on to become head coach, general manager, and part owner of the Washington Redskins before dying of cancer in 1970.


"Confidence is contagious and so is lack of confidence."

"Leaders are made, they are not born. They are made by hard effort, which is the price which all of us must pay to achieve any goal which is worthwhile. "

"Man’s finest hour is the moment when he has worked his heart out in a good cause and lies exhausted on the field of battle victorious."