Making a Difference with Your Life 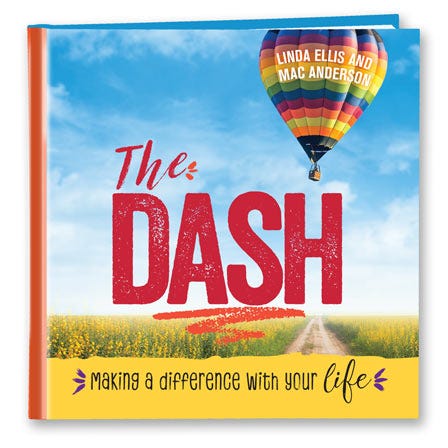 Now this favorite book has a brand new look!

The date you were born and the date you died aren’t what really matter. It’s “the dash” — those years in between and what you do with them — that does. This inspirational book is one of the most searched for books on our site because it has such life-changing potential.

When Linda Ellis wrote the poem in one afternoon in 1996, she had no idea that it would change her life forever. In 239 words, she captured the “simple truths” of why we were put on this earth. Since then, “The Dash” has been published hundreds of times in books, newspapers, magazines, and company newsletters. It has also been read countless times at company meetings, graduations, and funerals.

The Dash is available in a beautifully designed gift book that contains an additional nine simple truths from Mac Anderson about what we can do to make a difference with our lives. Many of the motivational quotes from the book and similar inspiring quotes are available as framed prints that can be given as a gift or kept to remind yourself of what is important.

While it still amazes me, a simple poem I wrote one afternoon forever changed my life. It all began when I faxed a copy of this poem to a syndicated radio show in Atlanta. Soon after receiving it, the host of this popular show read it on the air. Little did I know how much my life would change from that day forward.  Titled “The Dash,” these 36 lines have touched millions of lives and have literally taken on a life of their own by traveling all over the world. I call it  uncomplicated poetry in a complicated world, which became the slogan for my internet poetry company.

People are always asking me what, in particular, inspired me to write this poem. I believe it was a combination of things in my life at the time. It was during a  period when I was working for the top executives of a very large and successful corporation. It was a strict company with a tense working environment. I began to watch how the priorities in many lives there had become misaligned. It seemed to me that the bosses were worrying far too much about that which was inconsequential in the scope of life. Also, resonating in the back of my mind were the words from a letter which had been previously routed around the office. It had been written by the wife of an employee who was aware that she was dying. I was so moved by that letter that I saved a copy of it and continue to live by her words:

“Regrets? I have a few. Too much worrying. I worried about finding the right husband and having children, being on time, being late and so on. It didn’t matter. It all works out and it would have worked out without the worries and the tears.”