By Al Ritter , John J. Murphy , Michael McMillan and Scott Beare
$47.85
Be the first to review this product 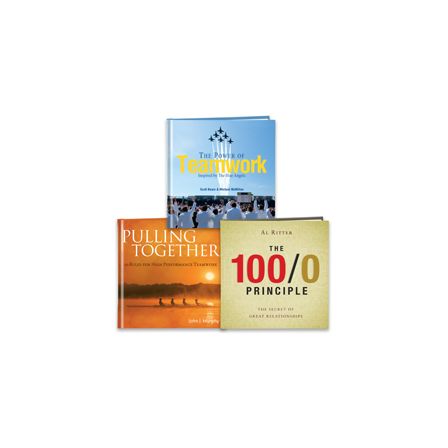 The books in the Teamwork Three Book Gift Set are designed to reinforce the value of teamwork in your organization. Each book has an unforgettable message and makes a great meeting takeaway!

Included in this Set:

Pulling Together by John J. Murphy—It’s easy for any organization to say…“We value teamwork.” However, saying it, versus committing to the principles to grow it, can be two different things. And that's what Pulling Together is all about! Author John Murphy presents the ten rules for high performance teams in an engaging way that every person in your organization can understand.

The Power of Teamwork by Scott Beare and Michael McMillan—Get your team ready for peak performance when you apply the nine principles of teamwork used by the Blue Angels. No pilot license needed—each principle ties back to what it means to your company and your team.

The 100/0 Principle by Al Ritter—The 100/0 Principle...The Secret of Great Relationships may be the most important book you’ll ever read. The message is truly life-changing. Author Al Ritter is a management consultant who works with CEOs, other leaders and teams who are committed to achieving breakthrough results.

AL RITTER is a management consultant and professional speaker, in addition to being an author. He is founder and president of The Ritter Consulting Group, and has consulted for the past 20 years to thousands of people across many industries in both the U.S. and overseas. Al is a leadership coach who works with CEOs, other leaders and teams committed to achieving breakthrough results in their own and their organization’s performance.

Scott maintains his flight currency today and resides outside of Chicago with his wife of 13 years, Shane, and their two children Joshua (11) and Jennifer (7). For more information, please visit: scottbeare.com.