After you place your order, you will receive an order confirmation email from customercare@simpletruths.com. If your email does not arrive, please check your spam folder and be sure to add our email address to your address book. 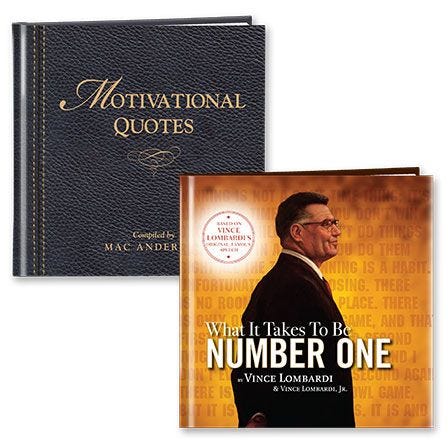 Keep your battery and your team charged with our Motivational Two Book Gift Set containing two of our bestselling titles. Motivational Quotes is the perfect book to help boost your attitude and reinforce the positive when times get tough. What it Takes to be Number One is based on Lombardi’s famous speech. This is a gift set that anyone will enjoy!

Included in this Set:

Motivational Quotes by Mac Anderson—Mac Anderson believes, “The right words can engage the brain and bring an idea to life.” This handsome book is filled with 160 motivational quotes that will inspire you when you need it most.

What It Takes to Be Number One by Vince Lombardi and Vince Lombardi, Jr.—The Lombardi philosophy transcends football. His powerful words capture the fundamentals of success in any sport, business and life.

Vince also brings that same passion to his speaking and writing. He's written four books and speaks 60-70 times a year on topics such as Leadership, Motivation and Teambuilding. For more information, please visit www.vincejr.com.
Reviews
Write Your Own Review
All content and design copyright © Simple Truths 2020. All Rights Reserved. View our Privacy Policy and Terms of Use.