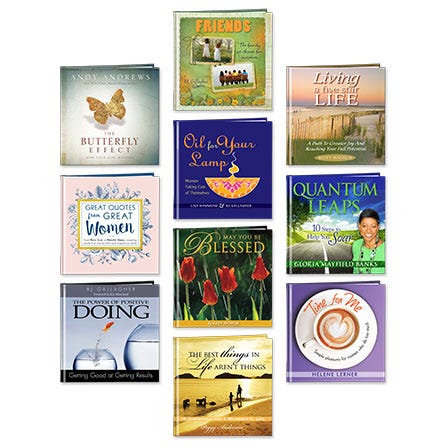 What are the top qualities that come to your mind when asked about traits of a woman you admire? Do you think kind, caring, and compassionate? How about tough, brave, and courageous? Women encompass all these qualities and more. Whether she be a sibling, relative, co-worker, friend, boss, or mentor, there are women around us who help pave the path to our personal and professional success. With the 10 Inspiring Books for Women Bundle, you can read more from inspirational women, as well as delve deeper into motivational topics for women. You can also get more inspiration from our blog>>

ANDY ANDREWS, hailed by a New York Times writer as someone who has quietly become “one of the most influential people in America,” is a best-selling novelist and in-demand corporate speaker for the world’s largest organizations. He has spoken at the request of four different U.S. Presidents and at military bases worldwide. Andy is the New York Times bestselling author of The Traveler’s Gift, The Lost Choice, Island of Saints, The Noticer, and Return to Sawyerton Springs.

He lives in Orange Beach, Alabama, with his wife, Polly, and their two sons. To book Andy for corporate events, call (800) 726-ANDY (2639) or visit andyandrews.com.

BJ GALLAGHER is an inspirational author and speaker. She writes business books that educate and empower, women’s books that enlighten and entertain, gift books that inspire and inform, and kids’ books that charm and delight. Whether her audience is corporate executives, working women, or a group of giggling youngsters, her message is powerful, positive and practical. BJ’s international best-seller, A Peacock in the Land of Penguins, has sold over 300,000 copies in 22 languages. Her additional books include It’s Never Too Late to Be What You Might Have Been, Why Don’t I Do the Things I Know are Good for Me?, Learning to Dance in the Rain, The Best Way Out is Always Through, Oh, Thank Goodness, It’s Not Just Me!, Oil for Your Lamp, Friends, The Road to Happiness, The Power of Positive Doing, The Power of One, and The Leadership Secrets of Oz.

LISA HAMMOND founded Femail Creations, a mail order catalog and website for unique gifts for women. In addition to running her own companies and writing books, Lisa is a sought after business consultant for companies and individuals seeking creative advice.

BETTY MAHALIK was a Professional Certified Coach (PCC), ilife and business coach, corporate trainer and facilitator. She taught people how to communicate effectively, set goals, manage stress and deal with change for over two decades and in 1987, founded her firm, Dynamic Solutions Coaching & Training. In 2007, she won the Women of Distinction Award (WODA).

“My mission as a coach and trainer is to give people the tools and the inspiration to transform their potential into performance!”

In 2014, Betty passed away after a courageous 13-month battle with breast cancer.

KATE NOWAK leads a joyfully simplistic life in rural Texas where, surrounded by friends, family and bountiful blessings of the most wonderful sort, she lives with her husband of 40-plus years, a cluster of farm animals far too domesticated for any real farm to claim, and two outrageously spoiled dogs.

Believing the quickest way to right the world is by honoring what is already right, Kate strives daily to be an active dispatcher of blessings by incorporating the blessing process into every facet of her life. Through participation in her world-wide blessing experiment, she also encourages others to do the same and offers instruction in living what she lovingly refers to as the “BlessingWay.”

DR. GLORIA MAYFIELD BANKS, described by many as “energy in motion,” is a woman of many accomplishments. She has a Harvard MBA and an honorary doctorate from the University of Maryland–Eastern Shore and is a renowned motivational success strategist, a multimillionaire entrepreneur, and a Mary Kay Independent Elite Executive National Sales Director.

Growing up in a loving family in Detroit, Michigan, Gloria was the third of four girls born to parents who were both educators. At an early age, Gloria’s parents discovered she struggled with reading, which was later diagnosed as dyslexia. Despite the challenge, Gloria never considered dyslexia a handicap, just another obstacle to overcome. Gloria graduated from Howard University and began her career as a sales representative for IBM. She later joined Stratus Technologies as a manufacturing marketing manager and went on to become assistant director of admissions at the Harvard University School of Business, where she traveled nationally and internationally to recruit students. Gloria has since counseled and encouraged victims of domestic violence and lobbied in Washington, DC, as an advocate for domestic violence prevention.

Faced with being a single mother and dealing with a difficult divorce, Gloria began her Mary Kay business to supplement her income. Within eighteen months, she set new company sales records and later grew her business to more than $24 million in area retail sales and an area of more than six thousand Independent Beauty Consultants. Her record-breaking ascent to Independent Elite Executive National Sales Director was faster than anyone in the company’s fifty-year U.S. history. Gloria is one of only three women in the United States to become a Mary Kay Independent Elite Executive National Sales Director.

Today, she has expanded her entrepreneurial influence to include not only her record-breaking Mary Kay business, but also her co-ownership of a marketing, product, and promotional events company. She is happily married to her husband, Ken, and they share four adult children and three grandchildren and reside in Baltimore, Maryland.

HELENE LERNER is the author of 13 published books including Time for Me, her outstanding Simple Truths book that motivates women to develop a positive work-life balance. Helene is a prolific author, independent public television host, Emmy award-winning executive producer, workplace consultant, and women’s empowerment expert. Throughout each of her roles, Helene exhibits a passion for inspiring women to achieve their best.

Helene began her career as a public school teacher in New York City. During the 1980s, she used her innate business instincts to pursue sales and marketing assignments then worked her way up through the management ranks of the New York Times. She is currently the CEO and founder of Creative Expansions, Inc., a multi-media company whose mission is to empower women and young girls. Since 1994, Helene has produced and hosted more than twenty televised specials. She received American Public Television’s “MVP” Award for her outstanding contributions to public television.

In addition to her published books and television specials, Helene maintains a private practice where she provides empowerment tools for groups and individuals. She also advises corporations on leadership and diversity initiatives. A member of Phi Beta Kappa, Helene holds an MBA from Pace University and a master’s in education from City College in New York City, where she currently resides. She has a robust social media presence and frequently provides tips and inspiration to loyal followers.