Simple pleasures for women who do too much

All of our personalized gifts begin printing once your order is placed and require approximately 4 business days for processing. To help with your selection, delivered estimates include processing plus time in transit.

Your order will ship from a location in the US. On average, most customers will receive their gift in approximately 10–15 days once the order has shipped. 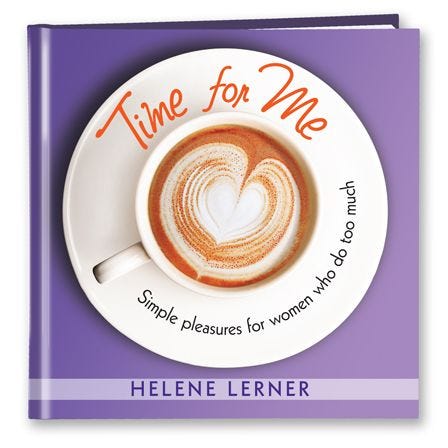 Women are notorious for taking care of everyone else first, exhausting themselves and losing their spark in the process. Time for Me is for any woman who feels stretched too thin, burnt out, or ready to find a better work-life balance.

Author Helene Lerner helps women figure out if they’re doing too much, asking readers to reflect on different scenarios in their life, such as:

Then she provides four power keys for what she calls the Time for Me Program, an easy plan to help women nourish their spirit and find contentment in their lives.

HELENE LERNER is the author of 13 published books including Time for Me, her outstanding Simple Truths book that motivates women to develop a positive work-life balance. Helene is a prolific author, independent public television host, Emmy award-winning executive producer, workplace consultant, and women’s empowerment expert. Throughout each of her roles, Helene exhibits a passion for inspiring women to achieve their best.

Helene began her career as a public school teacher in New York City. During the 1980s, she used her innate business instincts to pursue sales and marketing assignments then worked her way up through the management ranks of the New York Times. She is currently the CEO and founder of Creative Expansions, Inc., a multi-media company whose mission is to empower women and young girls. Since 1994, Helene has produced and hosted more than twenty televised specials. She received American Public Television’s “MVP” Award for her outstanding contributions to public television.

In addition to her published books and television specials, Helene maintains a private practice where she provides empowerment tools for groups and individuals. She also advises corporations on leadership and diversity initiatives. A member of Phi Beta Kappa, Helene holds an MBA from Pace University and a master’s in education from City College in New York City, where she currently resides. She has a robust social media presence and frequently provides tips and inspiration to loyal followers.