The Strangest Secret with CD/DVD Combo 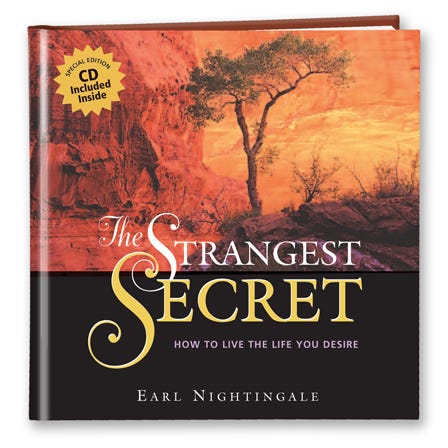 For the first time, Earl Nightingale’s famous words written in 1957 are presented in a beautifully designed gift book with a CD/DVD combo of his original recording. This inspirational message is as timely today as it was when first written. This book and CD/DVD set is a great gift to inspire anyone in your organization to truly understand how to get from where you are to where you want to be.

Earl Nightingale’s classic, The Strangest Secret, earned the first Gold Record for the spoken word, with sales exceeding one million copies, and became the first recording of the spoken word to become platinum. There’s a reason. This may be one of the most powerful books you will ever read. The audio CD runtime is 5 minutes and the DVD runtime is 3 minutes.

EARL NIGHTINGALE knew a thing or two about overcoming obstacles and conquering difficulties. And he had a unique gift for inspiring those around him to do the same. Born into a poor California family in 1921, Earl survived the meager years of the depression, joined the Marines at age 17, and was one of only 12 men to survive the Pearl Harbor bombing of the battleship U.S.S. Arizona.

After leaving the service, he embarked on a career in broadcasting. His sonorous voice and articulate, impassioned delivery won him a great acclaim in the broadcasting industry. At the insurance company he purchased at the height of his radio career, the sales force relied on his regular Saturday "pep talks" delivered over the PA system to motivate their performance through the week.

One week in 1956, Earl pre-recorded his message so that he could take a vacation without his staff missing their weekly dose of inspiration. The message absolutely electrified the staff. Word of this extraordinary recording spread, and the office was soon deluged with requests for a copy of it. To keep pace, Earl recorded the message, which he called "The Strangest Secret," on 10-inch recordings. Within a year, through nothing more than word-of-mouth, they were selling 2,000 copies a week.

In 1960, Earl Nightingale co-founded the Nightingale-Conant corporation to distribute this information. Since then, the audio version of "The Strangest Secret" has sold well over a million copies and continues to improve the lives of everyone it touches. The original version of The Strangest Secret, along with the updated Ignite Reads version are both available. In addition, the new The Six-Word Secret to Success Ignite Reads book is now available. Learn more about Earl's ideas in these blog posts>>