Your Attitude Not Your Aptitude Framed Inspirational Print

By Zig Ziglar
$15.95
Be the first to review this product

Ships to United States and Canada.

Ships to: United States and Canada. 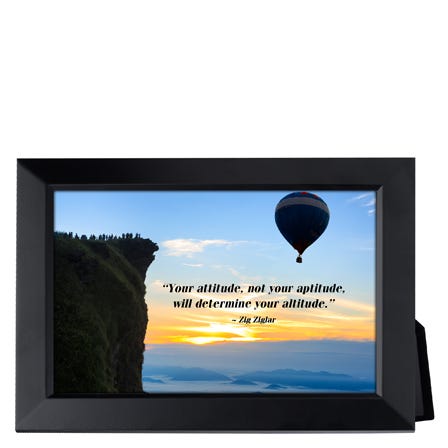 This framed inspirational print is a beautiful reminder that our futures and our success are shaped more from maintaining a positive attitude than by having aptitude.

Quote on Print: “Your attitude, not your aptitude, will determine your altitude.” ~ Zig Ziglar

Ways to Use This Gift Set: Remind a friend or yourself of the strength of a positive attitude.

Note: Due to importation restrictions, our wood framed inspirational prints can only be shipped to the United States and Canada.

ZIG ZIGLAR was an internationally known speaker and the best-selling author of 26 books including the legendary classics See You at the Top and Secrets of Closing the Sale. His works have been translated into 40 different languages and dialects. He has been featured on 60 Minutes, The Today Show, and 20/20. 60 Minutes says, “He was a legend in the industry — the Bill Gates, Henry Ford and Thomas Edison of enthusiasm.”

From humble beginnings in Yazoo City, Mississippi, to being presented with the National Speakers association’s highest award, “The Cavett,” Zig Ziglar was recognized by his peers as the quintessential motivational genius of our times. His unique delivery style and powerful messages earned him many honors. Having shared the stage with Presidents Ford, Reagan and Bush, Generals Norman Schwarzkopf and Secretary of State Colin Powell, Dr. Norman Vincent Peale, and Paul Harvey, Zig Ziglar was one of the most sought after personal development trainers in the world. Titans of business, politics and sports consider him to be the single greatest influence in their lives.