By Earl Nightingale , Mac Anderson and Vicki Hitzges
$47.24 Reg $51.85
Be the first to review this product 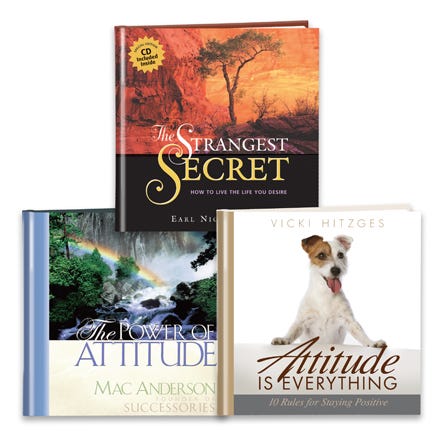 Attitudes are contagious. Is yours worth catching? How about your co-workers?

The Attitude is Everything Three Book Gift Set is perfect to help instill a culture of positive thinking within your company. These three inspirational books will have your team working more harmoniously, getting more done, achieving their goals, and driving towards success!

It’s advantageous to possess a sunny outlook. Doors open to optimists. They make friends, earn respect, close sales, produce loyal clients, and others enjoy and want to be like them. The question is how can we do that consistently? That’s what the three books in this gift set are all about.

Attitude is Everything by Vicki Hitzges — Your success or failure is not about how you dress, how you look or even how you’re educated. It’s all about your Attitude! Vicki Hitzges speaks to large corporations around the globe teaching audiences to build better relationships, zap stress and conquer change. Now in her first book, Attitude is Everything, she shares the 10 secrets to a positive attitude with you.

The Strangest Secret by Earl Nightingale — Written and recorded by by Earl Nightingale this story became the first recording of the spoken word to be certified platinum. There’s a reason. This may be one of the most powerful books you will ever read. Original audio recording included. The book and CD/DVD set is a great gift to inspire anyone in your organization to truly understand how to get from where you are to where you want to be.

The Power of Attitude by Mac Anderson — I love this quote by Henry Ford, “Whether you think you can, or think you can’t…you’re right.” This one-of-a-kind book addresses what matters most as it relates to your success in life…Your Attitude! Mac Anderson takes you on a journey of personal discovery in this powerful, beautifully designed gift book. It will help you manage your energy levels, keep your soul alive, take new paths, reduce stress, attack your fears, and hang on when the storms blow through.

EARL NIGHTINGALE knew a thing or two about overcoming obstacles and conquering difficulties. And he had a unique gift for inspiring those around him to do the same. Born into a poor California family in 1921, Earl survived the meager years of the depression, joined the Marines at age 17, and was one of only 12 men to survive the Pearl Harbor bombing of the battleship U.S.S. Arizona.

After leaving the service, he embarked on a career in broadcasting. His sonorous voice and articulate, impassioned delivery won him a great acclaim in the broadcasting industry. At the insurance company he purchased at the height of his radio career, the sales force relied on his regular Saturday "pep talks" delivered over the PA system to motivate their performance through the week.

One week in 1956, Earl pre-recorded his message so that he could take a vacation without his staff missing their weekly dose of inspiration. The message absolutely electrified the staff. Word of this extraordinary recording spread, and the office was soon deluged with requests for a copy of it. To keep pace, Earl recorded the message, which he called "The Strangest Secret," on 10-inch recordings. Within a year, through nothing more than word-of-mouth, they were selling 2,000 copies a week.

In 1960, Earl Nightingale co-founded the Nightingale-Conant corporation to distribute this information. Since then, the audio version of "The Strangest Secret" has sold well over a million copies and continues to improve the lives of everyone it touches. The original version of The Strangest Secret, along with the updated Ignite Reads version are both available. In addition, the new The Six-Word Secret to Success Ignite Reads book is now available. Learn more about Earl's ideas in these blog posts>>

VICKI HITZGES is a motivational speaker who delivers high-voltage, fun presentations with immediately useful content to a wide variety of audiences. Her clients range from Microsoft to New York Life Insurance and Nokia Siemens to Chase Bank. Southwest Airlines employees got so charged up, they carried her around the room on their shoulders! Literally.

Vicki teaches audiences to build relationships, zap stress and conquer change, and she speaks from experience. Vicki learned how to relate quickly as a Dallas TV reporter and talk show host; she can deal with the stress of speaking to a crowd of ten or 10,000; and she’s conquered lots of changes along the way. Her books include Attitude is Everything and Stuck on Stop.