What it Takes to Reach the Top in Your Profession

By Robin Crow
$15.95
Be the first to review this product 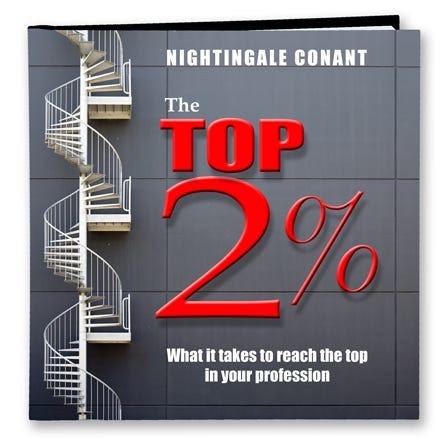 After 50 years of teaching success, Nightingale Learning Systems has gathered together the common bonds and shared values of those individuals who occupy the rarest positions in their industries—the top 2 percent.

With The Top 2%, our intention is to provide the latest research on what it takes to reach the top in the 21st Century—the road map for the next generation of achievers—starting with you.

If you find your overarching sense of purpose and focus on it, you’ll find yourself with a drive and a passion you never felt before! As Dostoyevsky put it, “The secret of a man’s being is not only to live, but to have something to live for.”

Find out what you’re living for, and you’ll be on your way to the STARS.

ROBIN CROW has forged a remarkable career on his journey from struggling musician to national recording artist, and then on to his startling success as entrepreneur and business owner. His company, Dark Horse Recording, a four studio complex he built from the ground up, has set the gold standard for customer service and excellence in the recording industry and is home to Faith Hill, Neil Diamond, Michael W. Smith, Jewel and Alison Krauss, to name a few.

As a speaker, performer and author, Robin has presented at over 2000 events, has had four books published, released ten albums, appeared on countless television shows and is a featured speaker for Nightingale Conant. Robin lives in Franklin, TN and serves on the boards of several organizations. He loves spending time enjoying some of his greatest passions—hanging out with his four children, throwing large barbecues for his studio clients and friends, and spending as much time as possible in the Rocky Mountains.