Dial It Down, Live It Up

8 Steps to Simplify Your Life 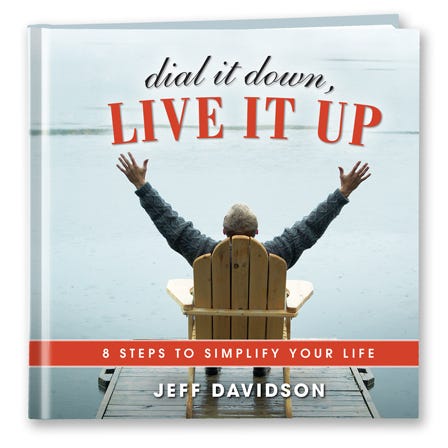 In an era that offers too many choices and too much information, people’s lives aren’t getting simpler. In fact, just the opposite is occurring.

Men and women in virtually every industry and profession today face a bewildering array of “stuff” that competes for their time and attention. Not surprisingly, increasing numbers of individuals seek to reassess how they work and live to achieve a simpler, more effective lifestyle without sacrificing what is vital to them.

By revealing fundamental truths as well as little-know realities on the path to a less encumbered life, Dial it Down, Live it Up serves as a handy guide to a life and career of greater grace and ease…without sacrificing what matters to you.

Be assured, simplicity is within your grasp.

JEFF DAVIDSON holds the registered trademark as the Work-Life Balance Expert®. Jeff is the leading personal brand in speaking, writing, and reflecting on work-life balance issues, and he has a passion for speaking to organizations that want to help their employees make rapid progress in this arena. He has spoken to Fortune 100 companies such as IBM, Cardinal Health Group, Lockheed, American Express, Worthington Steel, America Online, Wells Fargo, and Westinghouse, and to the Research Triangle Institute, National Office Furniture, DSM Pharmaceuticals, Novo Nordisk, Swissotel, Re/Max, Experient, and Lufthansa, among five hundred others.

Jeff is the author of Simpler Living, Breathing Space, The 60 Second Organizer, The 60 Second Self-Starter, and The 10-Minute Guide: Stress Management, as well as twenty-four iPhone apps in his “Work-Life Guide” series on iTunes. Jeff’s books have been published in eighteen languages, including Arabic, Chinese, Japanese, Malay, Turkish, and Russian; have been featured in sixty-eight of the top seventy-five American newspapers; and have been promoted in TIME magazine and the Wall Street Journal.

Jeff has been interviewed nineteen times by publications, including the Washington Post, Los Angeles Times, Chicago Tribune, Christian Science Monitor, New York Times, and USA Today. He currently is a columnist for sixteen publications, among them Accounting Web, Association News, Human Resources IQ, Inside Business, Practical Lawyer, and Real Estate Professional. Jeff also is an advisory board member for The Organized Executive, a monthly publication of Columbia Books, Washington, DC. In 2002, he was cited by Sharing Ideas magazine in its annual roundup of “consummate speakers.”

Learn more about Jeff at www.BreathingSpace.com.

Reviews 1
Write Your Own Review
Other Shoppers Enjoyed