By Adrienne Weiss and Greg Weiss
$16.99
Be the first to review this product 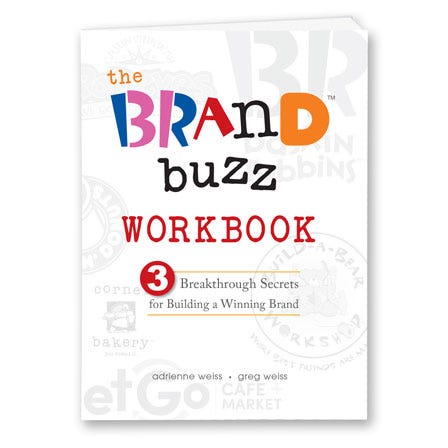 To succeed in today’s hyper-competitive market, your brand has to buzz. The Brand Buzz Workbook will get you and your team thinking about how you can gain notoriety, generate excitement, and earn loyal customers starting today.

A companion to Brand Buzz: 3 Breakthrough Secrets for Building a Winning Brand, this workbook is filled with exercises that will inspire change at both the individual and organizational levels. The prompts in this guide are designed to help you master the three essential elements of building brand awareness: storytelling, club making, and country building.

Evaluate existing strategies and dream up new ones with the help of this informative guide. Soon you'll have your own brand buzzing!

ADRIENNE WEISS, founder of Adrienne Weiss Corporation has been called “the high priestess of pop marketing.” Since 1986, AWC has been creating award-winning brand strategies for world-class companies from Coca-Cola and McDonalds to Build-A-Bear Workshop, Target Stores, and Disney. Adrienne and her team have created and reenergized brands all over the world.

Prior to the founding of AWC, Adrienne worked with Applause, Inc. to help expand the Smurf brand to over $1 billion dollars in retail revenue. She then became the president of Rage, Inc., a gift manufacturing business. She received her BFA from Syracuse University and did graduate work at American University.

She is an international speaker on brand building. Adrienne has served on the boards of the School of the Art Institute of Chicago, the Gene Siskel Film Center, and the Boys & Girls Clubs of Chicago. She is presently on the board of Metropolitan Family Services.

GREG WEISS is the president of the Adrienne Weiss Corporation. In his position, Greg is a key cog in the creative machinery of AWC, being a part of both the creative and the copy writing teams. Greg also runs the business side of AWC as head lawyer, accountant, and dish washer. He is also the cofounder of FUIR, LLC, an entertainment-focused mobile app company.

Greg has spoken about branding at Chicago’s tech start-up hub 1871, the University of Chicago Booth School of Business, and at Kellogg School of Management.

Before joining AWC, Greg attended Johns Hopkins University where he received a BA in Economics. He then earned a JD at the George Washington University Law School. Greg worked as an attorney in the corporate law department of McDermott Will & Emery before deciding to have more fun joining AWC. During his tenure at AWC, Greg received an MBA at Northwestern University’s Kellogg School of Management.